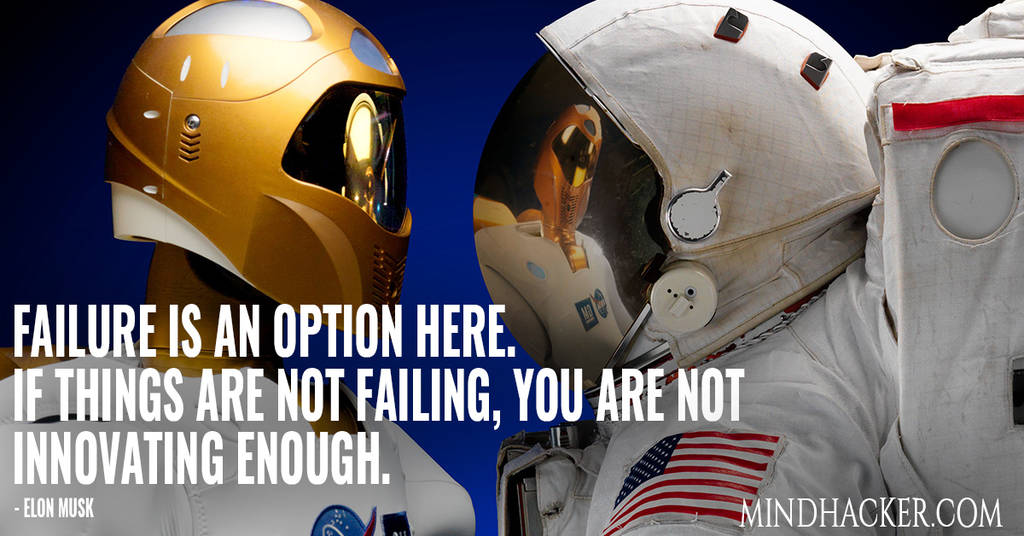 In grade school we are cultivated to pursue success at all costs. Grades, exams, reports and honor roles all reinforce this desired behavior pattern. While it may seem like a good idea, there is a dark side.
Mind Hacker, Mindfulness

FAILURE IS AN OPTION

Failure is an option here. If things are not failing, we are not innovating enough. – Elon Musk

In grade school we are cultivated to pursue success at all costs. Grades, exams, reports and honor roles all reinforce this desired behavior pattern. While it may seem like a good idea, there is a dark side.

The dark side is that at a very subtle level, we begin to shy away from failure.
Parents, teachers, everyone reinforces this by creating expectations. What, you got an F on an exam? You’re grounded for a week.

Kids get this sense that failure isn’t desirable, it’s like the parriah of their life. They avoid it at all costs, even to the point of lying, cheating, and avoiding risk taking.

Don’t put your hand up in class, you might get called out for not knowing the answer to a question, then you will look stupid and get teased.
Keep your head down, don’t stick out, don’t take risks, because you might get called on or asked to do more than the bare minimum to get by.
Does any of this sound familiar?

The real problem here is that no matter the academic skills one learns from this type of environment, the environment itself is sabotaging their ability to succeed in this new world.
This new Paradigm

In the old Paradigm predictability, standardization, and efficiency were all desirable outcomes of most businesses and of people’s lives. The industrial age had been built on these principles, and thus the education system which persists even today has those at it’s core.

Step back and ask yourself, what about today’s business, economic, political, or social environment is predictable, standardized, or even efficient?
A book by Alvin Toffler named Future Shock, talks about the “information doubling period” as a measure of the speed at which the world is moving. Back in the early 1900s it was about 80 years for the information in the world to double.

Today? It’s less than 2 years.
Think about the dramatic impacts that has. It’s truly a paradigm shift, and those who have figured that out are successful.
What have they learned?

Failure is not only an Option, but it’s desired. It’s necessary. Fail fast, fail often.
Fail fast and break things.
We keep hearing these memes go around. But what does it really mean, what is it pointing to?

It’s a recognition that in today’s world, you simply cannot gather enough data to predict the outcome of something fast enough, to have an impact.

I used to consult in the telecommunications industry. They would very often spend YEARS developing a new service before launching it. By then, the business opportunity has passed.

There was such fear around failing, around releasing the wrong thing, that they would fine tune it and spend time researching so much, that they sabotaged their own innovation, and ability to succeed.

Fail fast.
To fail fast we need to move fast. That means getting our minimum viable “whatever” out, and in the market as quickly as we can. Not done yet? No problem, just get it out and we will fix it as we go.

The interesting thing about this is that when you get it out there, you start to get feedback immediately. From your market. About stuff you would have never been able to predict.

Feedback doesn’t really mean you’ve failed.
But given the cultivation we’ve had, from the industrial aged education, it FEELS like it.

I’ve spent the last part of my career freeing executives, business owners, and professionals from the traps of their own mind.
From sabotaging their own businesses with unconscious patterns that were driven into them at such a young age, they normally don’t remember it.

Ready to free yourself from the trap of a scarcity mindset…

Ready to let go of limiting beliefs that everything must be perfect, and polished…

Then hit me up. We can work together.

Perspectives from the Mountain: Scratching your own back

What stage of life are you at?

Why the Term Enlightenment is Bullsh*t